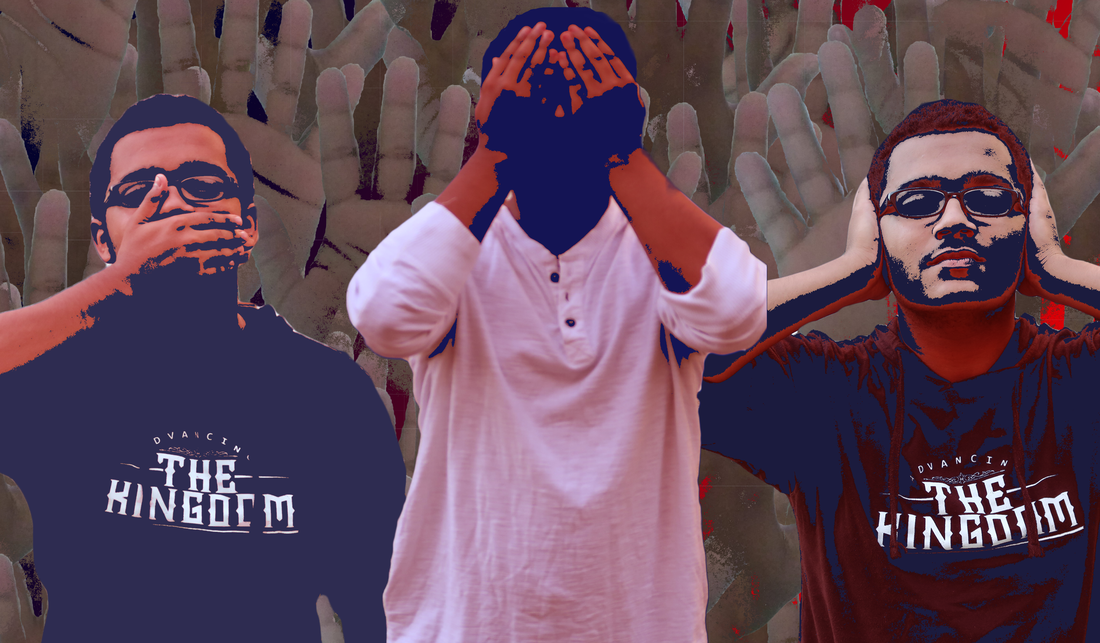 The digital collage is a self reflective piece, focusing mainly upon something that changed me. For this digital manipulation medium, I used Adobe Photoshop CS6. My piece "Acknowledgement of Self" derived from Shepard Fairey's piece, "Barack Obama Hope" and "Three Wise Monkey's." All of the pictures signify being lost in yourself. Not speaking to yourself "hopelessness," not looking at yourself "shame," not listening to yourself "doubt".

You never know who you really are gonna become until that defining moment comes. You know the things like your name, your family, your friends. But nothing is static in life, anything can change at anytime and you have no choice in what happens, just how you respond to it. You can be emotional and cry, you can be like a tree and feel nothing. Either way it’s there, and you have to face it.
Insults are the bane of everyone's existence, they feed on you like a leech does.. just about everything. On the outside you’re laughing, smiling, nothings wrong with it, it's just joking around. Everyday pretending that knives aren’t entering in and out of your body. You feel fine in the moment, until you go home and those things come home with you. I didn’t look in the mirror, I didn’t talk about it, I didn’t listen to myself. I kept it in the safe that was myself, and I threw away the key I call communication. Someone once told me, "You are your own worse enemy" and it was very true. I told myself these things not directly, but by constantly thinking about the thing in life that was meant to keep me down. I had done this all on my own, i was the villain.
My whole life was built around trying to hide it. All those insults stabbed into me were bleeding, but no one could see the blood except for me. I felt like I was trapped in an endless cycle, until I found my bandage. My bandage told me to love myself, stop being that bitter rival of myself hating myself for how I looked, and embrace it. I began to do that. Embracing the insults that I couldn’t change, and change the things I didn’t like. And then there I was, looking into a mirror, listening to myself, talking to myself, becoming the person I was meant to be. I finally realized why loving yourself is the true thing that matters and how important it is to be comfortable in my own skin. My defining moment.
The belief that nothing should be hidden and all imperfections should be shown is seen in the paintings by Chuck Close. Especially in the painting, “Self Portrait” (2004 - 05). I used the idea from “The Three Wise Monkey’s” which embodies the saying, “See no evil, Hear no evil, Speak no evil.” I used a counter acting idea, that seeing no evil, speaking no evil and hearing no evil, can still lead to more evil being spread. More specifically, through these ways of suppressing the evil, you cause more evil within yourself.

I wanted to tackle the very common idea that is "see no evil, hear no evil, and speak no evil." I saw lots of pieces of artwork that just consisted of skulls, and monkeys. Each of those pieces didn't really seem to have any meaning, so I looked into the idea and it was based on a Buddhist belief. The belief that if you see no evil, hear no evil, and speak no evil, you can escape the feeling of evil. But, thinking back on my life, I realized that the belief isn't true for me and probably from a lot of other people too. I decided to show in my piece "Acknowledgement Of Self" that this belief can lead to more evil, because there is no way to communicate your problems of you can't speak, look, and listen. Also I wanted to show the loss of identity in the face of the photographs, through the idea of not being able to see my eyes, as they are just a solid color. 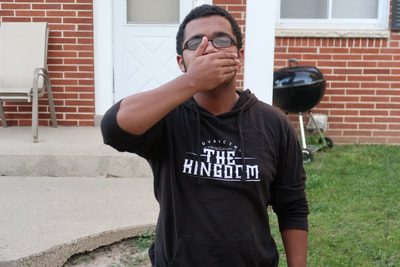 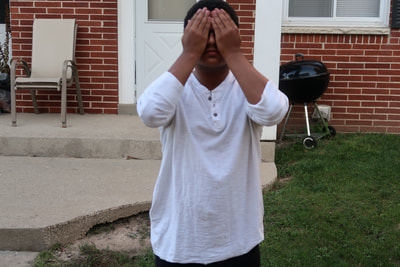 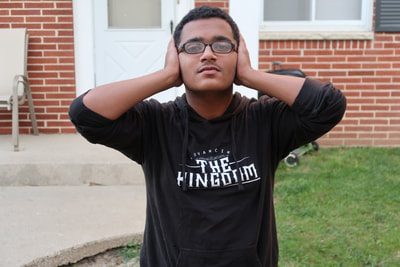 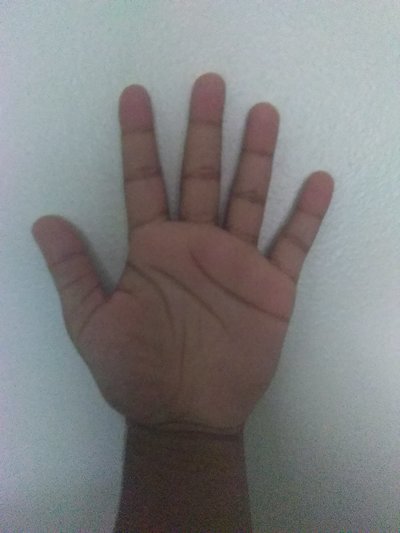 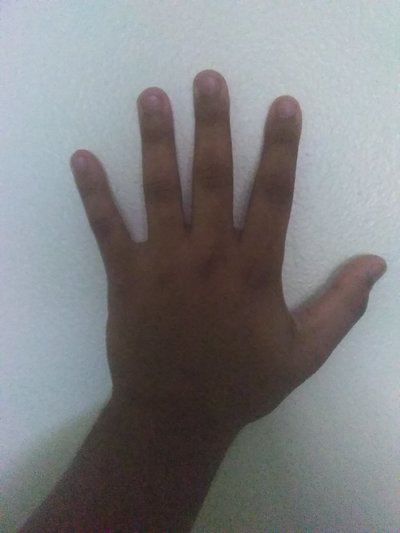 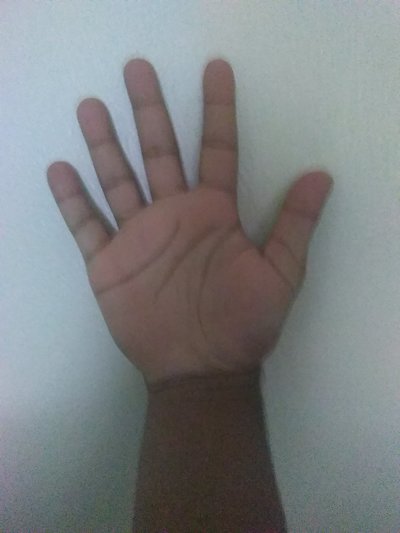 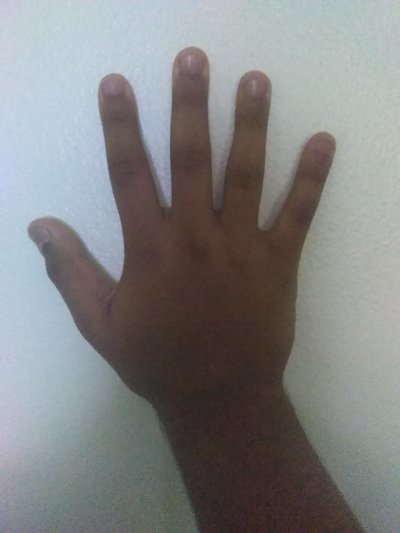 I used Abode Photoshop CS6 for my digital manipulation piece "Acknowledgement Of Self." To cut out the background picture I used at first the "Pen Tool" and then the "Lasso" tool. I then added a background gradation and adjusted the images of the hand and where they would look best. I then copied multiple pictures of my hand onto the piece, to which I edited every hand to a certain visibility to show that suppressing this evil slowly starts to degrade your identity into being forgotten. The front pictures I copied multiple layers on top of each other, and chose the the color groups, scarlet red & steel blue, along with ivory & steel blue. I then used the layer options to adjust the visibility of each layer making some parts steel blue and others red. I then added layer filters of red to show that you are still yourself but slowly fading into the background. 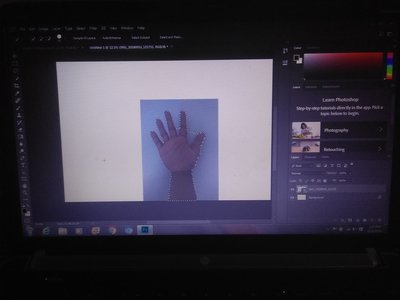 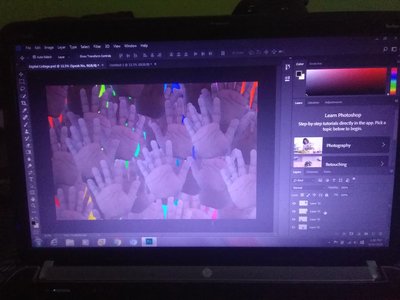 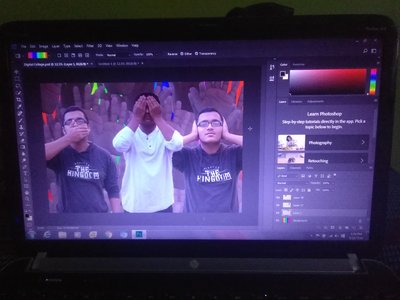 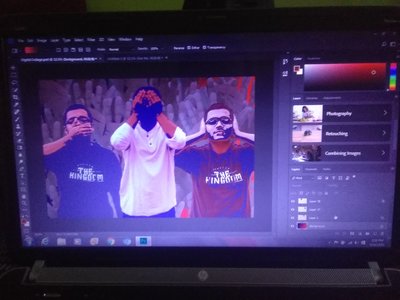 First​ to cut out the background picture I used at first the "Pen Tool" which allowed me to have cleaner lines with very not a lot of fixing after that process was done. I found that this tool is more efficient in getting clean line, but it was not fast as all. I did switch over to the "Lasso" tool which was a lot quicker but with decent efficiency. Next I move all of the hands in the place where they looked like they would cover the background gradation which was a rainbow gradation. I realized that a rainbow gradation would offset the entire idea of my piece, that following this belief of see no evil, hear no evil, speak no evil, can cause evil in it's self. I switched to a  steel blue, crimson red gradation. I also changed the colors of the center pieces very frequently. I couldn't seem to imply the evil growing until I though about two colors that I could contrast well. First I contrasted black and honeydew, but that set the balance of the piece off in being very heavy on the black. Rose and black had the same outcome, so I moved a little further from black into steel blue and then switched the rose red to scarlet red.

This piece, "Acknowledgement Of Self" was a hard, creative, long process. Being the second or third time I have used Photoshop, I was very inexperienced and had little idea on how it worked. My first idea included the normal colors of my skin and shirt, along with a white background and buildings. Shortly after starting this project, I realized that Photoshop is a whole new avenue to creating art, so I began to experiment with colors and my knowledge of manipulating layers and colors. This made it difficult to repeat on the other pictures. The photo on the right was difficult to create in that exact color group, so I decided to experiment with a different color on the left photo after spending a good amount of time on trying to recreate that same color group. I only later found out that I could have created a color group file, to which I could have translated it right to the other piece. I would've had to adjust it a small amount but it would have been relatively similar. Still "Acknowledgment Of Self" turned out better than I pictured it, if I was a little more experienced in Photoshop I would have been able to do exactly what I wanted to do. Now that I shows the am experienced on Photoshop at least a small amount, I can't wait to do more Photoshop in the future.
This piece shows the exact principal, "see no evil, hear no evil, speak no evil," by having one picture with a covered mouth, one with covered eyes, and one with covered ears. Yet in the color and background, it shows that the belief that those three things prevent evil feelings isn't always true. The color contrast and hands in the background show the difference of meaning that "Acknowledgement Of Self" and "Three Wise Monkey's" have. As for the "Obama Hope" by Shepard Fairey, I used the same color concept of “bold iconic style that is based on stylizing and idealizing images.” - Shepard Fairey. The way the colors stand out and hug the definition of the persons face is very similar in each of our pieces. However the meaning behind the color contrast is different. It is clear the Shepard Fairey used red, white, and blue for a symbol of Patriotism. While I used similar colors in the scarlet, steel blue, and white to signify a person's journey to darkness, evil, and the absence of identity.

Clearly explain how you are able to identify the cause effect relationship between your inspiration and its effect on your artwork?
The "Three Wise Monkey's" were used as a central idea for my piece, even though I had contracting viewpoints, it made me create my own "see no evil, hear no evil, speak no evil," center piece, which consisted of multiple elements. The "Obama Hope" piece was very appealing to the eye, and the colors when really well together, so the colors red, blue, and white were used in my piece, but not to show patriotic symbolism.
What is the overall approach the author has regarding the topic of your inspiration?
The creator of the "Three Wise Monkey's" used sculptures as a way to signify a belief over a wide spectrum of people for many centuries to come. Shepard Fairey used patriotic colors, in an urban style of color grouping that hugs the facial features, and contrasts with the rest of the face and/or body.
What kind of generalizations and conclusions have you discovered about people, ideas, culture, etc. while you researched your inspiration?
I found out that people can think different than I do, and some people can think the exact same. It's all a matter of perspective and experiences through a life time.
What is the central idea or theme around your inspirational research?.​
The theme circles around standing for a belief, whether that be political, or biblical. Stand for your belief's, and support them in any way you can.
What kind of inferences did you make while reading your research?
I made an inference straight out the gate stating that Shepard Fairey had to be a political person who agreed with Obama's campaign and wanted to support him in an artistic way.