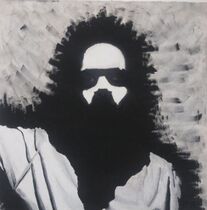 "Consumed" is a self portrait that derives from the idea of top down light in theater, and "Smoke and Mirrors" by René Magritte. The effect that top down light creates is an ominous effect that hides the features of the face. Seeming more like a dark, mystic being instead of a human being. In this portrait, I use all of the bad things, and darkness inside myself to portray the evil inside of all of us. This evil is hidden from the world, and this piece sheds light on that idea.

"Consumed" was a piece that I came up with relatively quickly. This as been a very rough beginning to the school year and it has nothing to do with school. I feel like I haven't been the "Self Portrait" version of myself on the inside. I feel like I have been this "Consumed" version. The darkness when it takes over creates a whole different person that many people don't get to see. It puts into perspective how someones life can be going horrible, but they never show it. This painting is a tribute to people that have a hard life in private, and don't show it in public. This use of black and white portrays the darkness taking over the color and light. Additionally, the facial features are blocked off showing a change in character and a darker change at that.

I believe that "Consumed" turned out really well. I didn't use color because I wanted this piece to contrast with my self-portrait because my self-portrait is a colorful life like version of myself, while this piece represents the darkness and how we would look with just the darkness. I do like how my use of grey in the shirt looks. At first I felt like the shading in the shirt wasn't well done and I went over it several times with several different shades of grey. I am really proud of how it turned out in the end, and with the colors I used.
I do however believe that the process of using the projector could've been done a lot more efficiently. I put a blanket under the projector which caused the projector to move slowly, so I ended up needing to place a book under the projector. This was not an effective way of tracing because the projector would move and so the tracing lines. Otherwise, the process of creating this piece was very enjoyable and I would like to go through the process again.

​Clearly explain how you are able to identify the cause effect relationship between your inspiration and its effect on your artwork?
​The stage lighting scheme of the top-down light is exactly what this piece is about. The idea of hiding facial features from viewer and changing this person's character showing this dark side directly relates to my piece. "Consumed" is a piece that shows the darker side of people, and sheds light on the fact that some people hide their true feeling deep inside. "The Lover's" by René Magritte creates an ominous mood, and challenges the norms that you see. My piece isn't very similar to any of my other pieces, and even other's pieces because of the black and white.
What is the overall approach the author has regarding the topic of your inspiration?
René Magritte has a way of twisting common objects and people and putting them in a place that evokes a confused, potentially startled emotion towards the viewer. In "The Lovers" he shows a woman and man who have bags over their heads. This makes the viewer uneasy and creates the questions of what these people are doing. Challenges norms, and is very strange.
What kind of generalizations and conclusions have you discovered about people, ideas, culture, etc. while you researched your inspiration?
Nobody is immune to hurting and pain, just some people are really good at showing it. Some people need that extra help and some people don't. Good people are the ones who do something to help and then stop if the person needs them to.
What is the central idea or theme around your inspirational research?.​
The central idea of my inspiration consists of a person changing based on their inner emotions. The top down theater light shows this by removing facial features, and the other painting creates an ominous idea around people.
What kind of inferences did you make while reading your research?
I inference that there are many more people that hide their pain out in the world than people realize. Suicidal people or people that have shown that they are, are just the start. There are people that we know who may seem happy, but you never really know how they are on the inside.