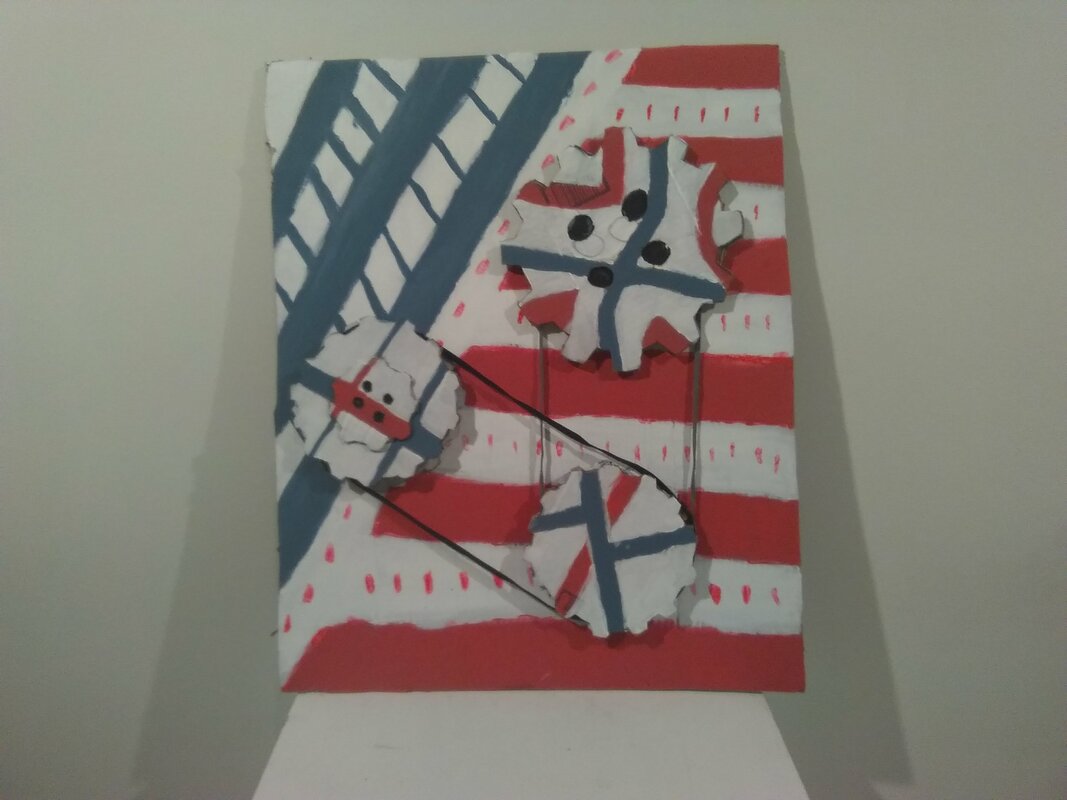 "Gears Of The Nation" was a piece created using mixed media deriving from Jackson Pollock's "Untitled c. 1943" and "The Idea Of A Gear" created by a Greek mathematician/engineer. This piece represents the nation as a while community, and how the internet and how money effect our everyday lives. And how they can have such a strong influence on our lives, that we forget about one of the most important things that make us such an advanced species. Our ability to communicate, and express ourselves through creativity have been forgotten.

Using my inspiration of Jackson Pollock and the idea of the gear, I created an idea of gears stacked on top of each other. One group of gears would have a Wi-Fi signal, and the other would have a dollar sign. These would signify the two big things that control peoples lives in today's society. Normal gears are made out of metal and are harder to damage and take longer to change. Cardboard gears on the other hand are very easily destroyed and can be replaced easily. The colors I decided to use were red, white, and blue which symbolize the American colors red white and blue. The colors red, white, and blue are very patriotic, and patriotism is associated with honesty, loyalty, pride, ect. This is why when painting the colors I painted separately to create and show the symbol that the US is. Also to show that this piece is directed at the US. 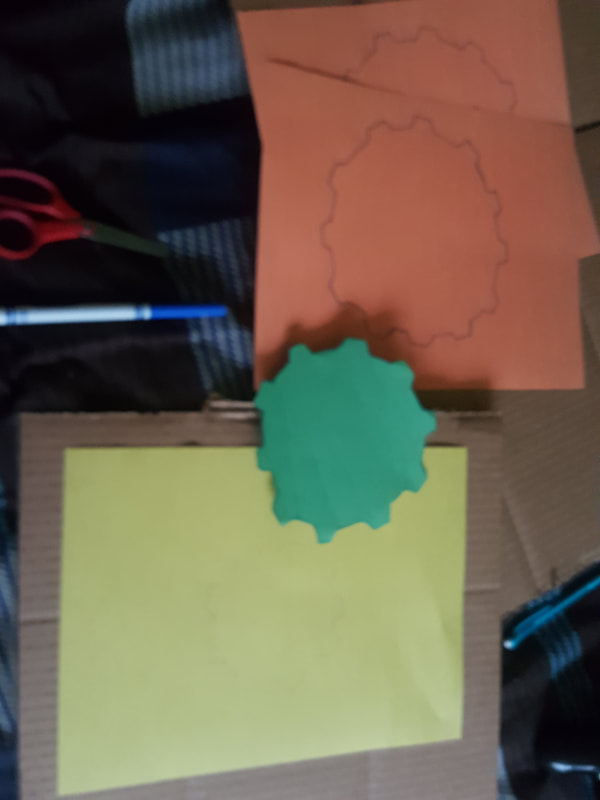 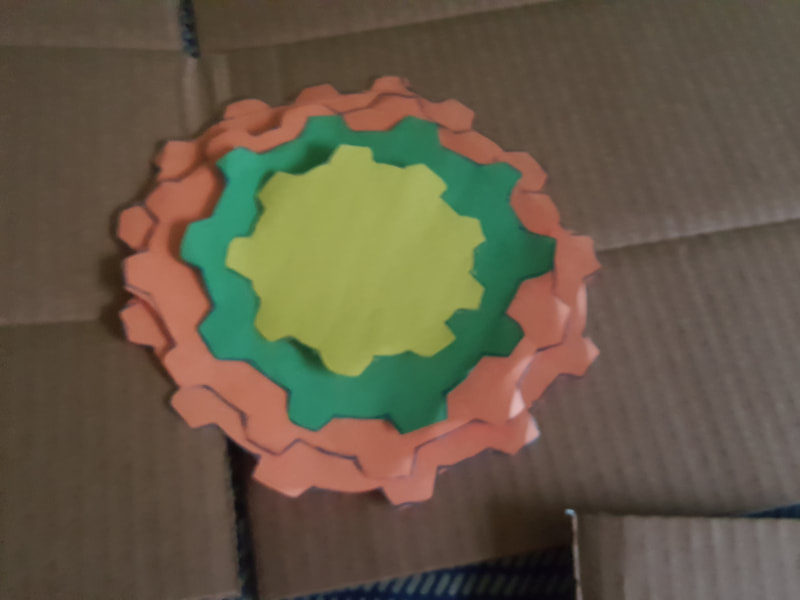 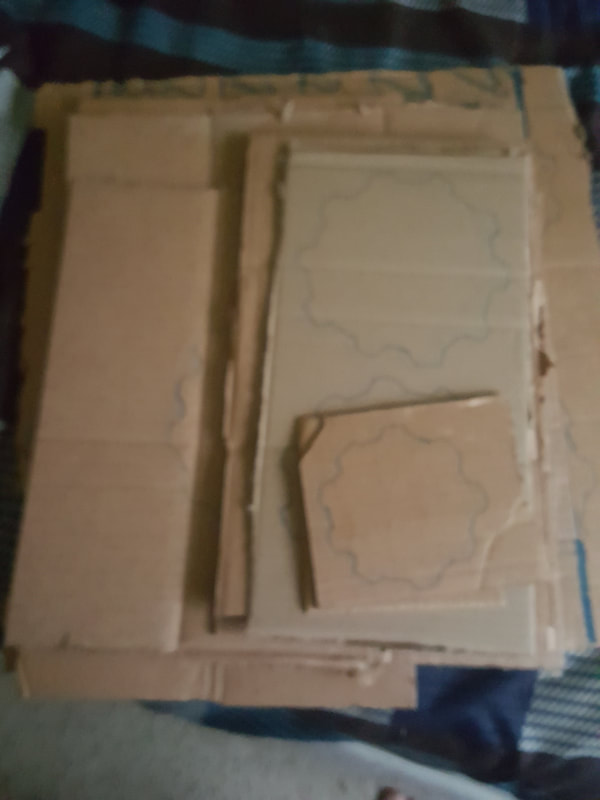 First in the creation of this project, I created stencils onto colored paper. There were four stencils and I used each of them four times in order to get a thicker width for each gear. I then using an exacto knife to cut out the gear from each piece of cardboard. After the card board cut outs were made, I used fabric glue to bind the pairs of cardboard cut outs together (each two cardboard cut outs of the same cut out were a pair). I then glued the larger gear to the second largest gear, and then the third, and lastly the fourth. Then I repeated the process for the second gear. I then drew out in marker the Wi-Fi signal, and the dollar sign on each of the top gears. When I painting, I decided to use a Ruby Red, a Steel Blue, and White to signify America. I would flick, and drip the paint over the piece with a variety of the tree colors. I then used a paintbrush to mix the paint around enough. The strokes I used when painting were circular strokes, similar to how you would make a cloud. This gives the feeling of the mixture of the patriotism, while in a way getting rid of that spectrum of patriotism due to the mixture. 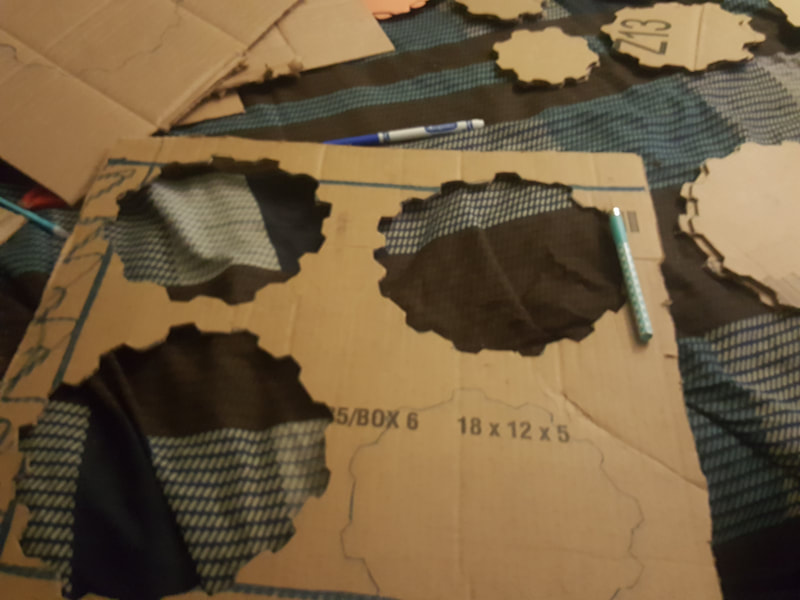 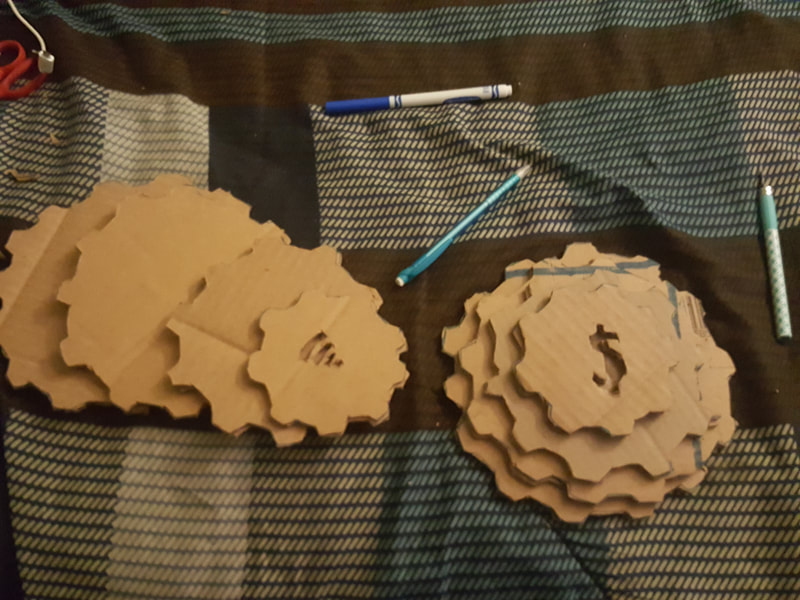 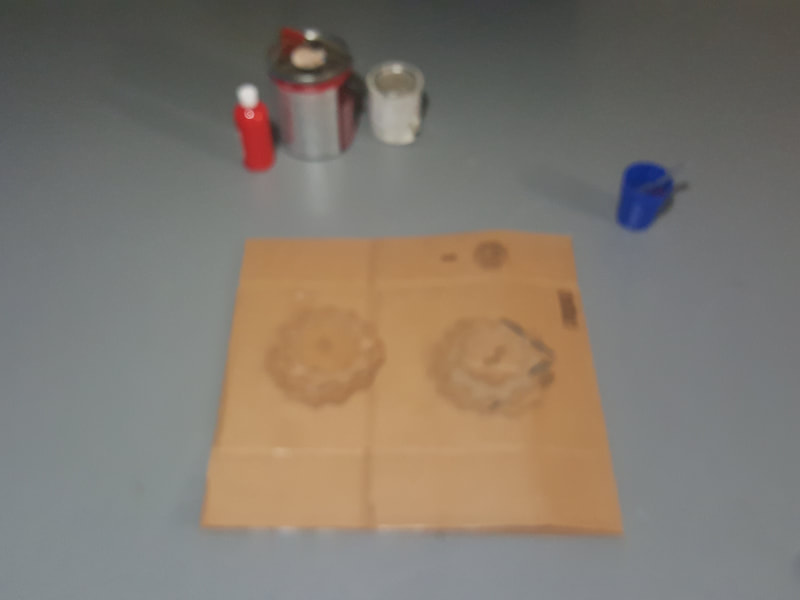 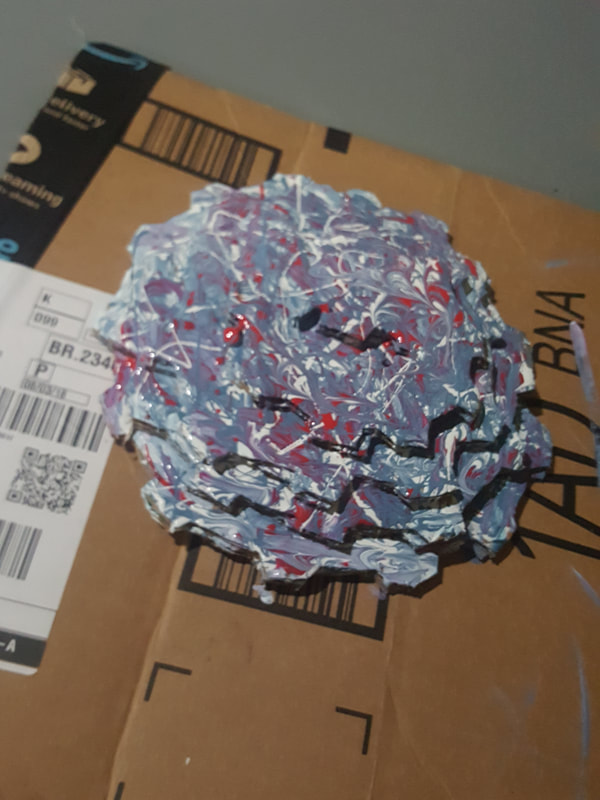 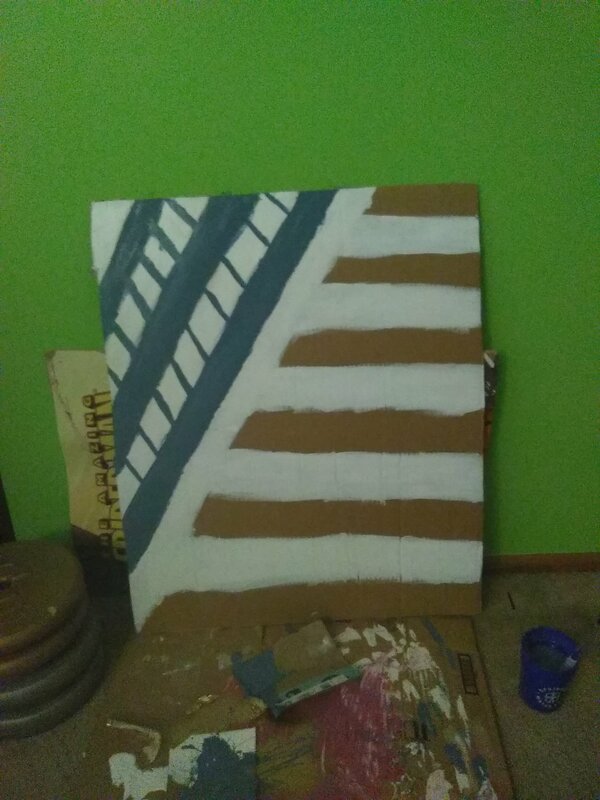 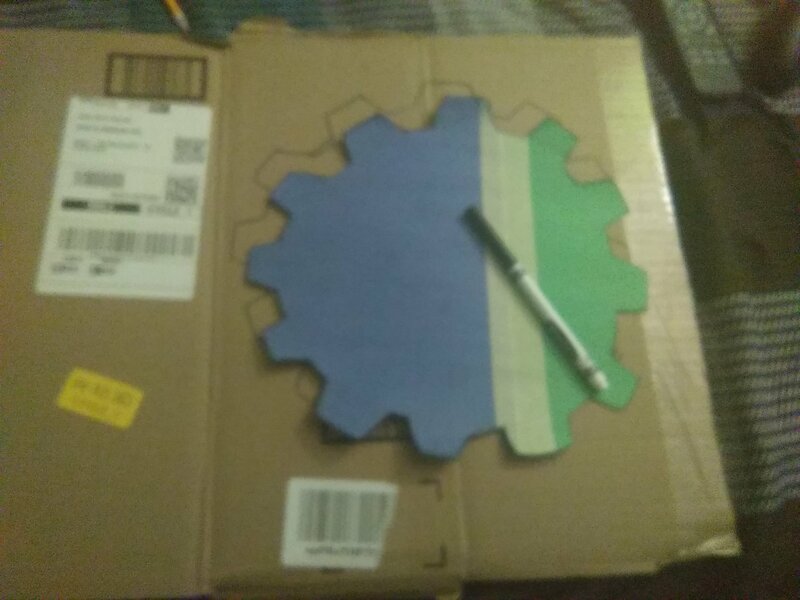 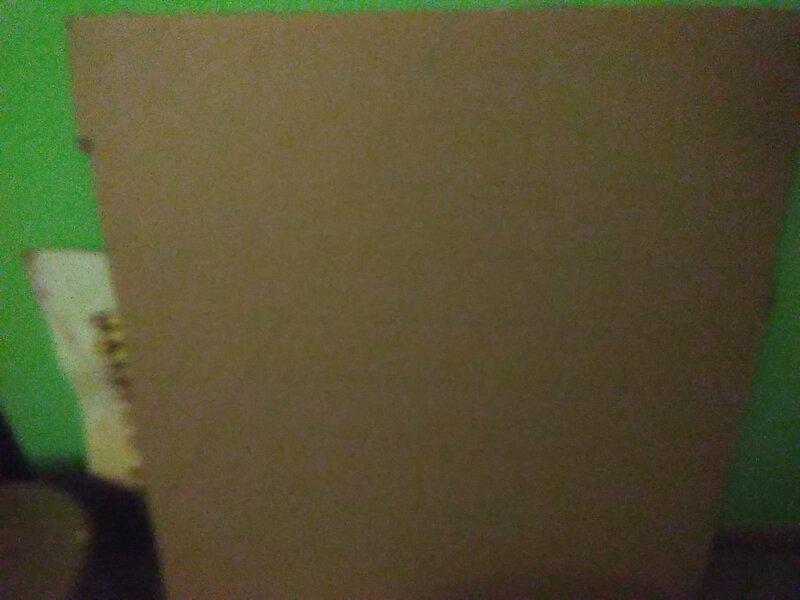 The "Gears Of The Nation" at first wasn't going to be a Mixed Media piece. the original plan was to make an intricate design of a gear in the snow; an earth piece. But the idea just seemed so basic, and I found it very hard to find meaning to this piece. Plus the lack of snow outside wouldn't have given me the accurate interpenetration that I wanted of the deep roots of the world. I ended up using cardboard rather than actual metal elements, not only cause they were hard to find. I needed something biodegradable, can be damaged relatively easily, and something that doesn't hold up very well (flimsy). After the cutting process was done (or so I thought) I realized that each of the gears would have to be a little lager in width, so I made another two copies of each cut-out.

"Gears Of The Nation" was a strong representation of the process of creating a piece in any different medium. I feel like seeing a lot of Andy Goldworth's environmental sculptures made me want to create a nature piece. I still would love to, but the idea I had was too reliable on the weather and not enough adapting was going to happen in the environment. It felt like I was just gonna move a bunch of snow around to create a picture. My final product was very similar to my idea for the nature piece. The only real differences were color, 3-dimensional, and layers. I think that with more experience using tools, and having to adapt will better prepare me for creating a nature piece. Also I believe that the more I get used to painting and blending using the brush, the better I will get at using my brush to get those needed strokes.
My piece "Gears Of The Nation" represents the idea of a gear, the fact that gears were created each with a small task to help another gear. When all of these gears help each other, the machine will work properly. People are so split on everything, resources especially such as money, food, clothing, ect. We all need to pull our equal share, because everybody is effected when one gear pulls too hard. Also like Jackson Pollock, his style of mixing his painting rhythm by using small amount of paint and dashing them across his canvas. I not only mixed the painting rhythm in which I dashed and splashed my paint across my piece, but I also mixed colors to further solidify the unity of the gears.

Clearly explain how you are able to identify the cause effect relationship between your inspiration and its effect on your artwork?
Jackson Pollock creates abstract images through a painting, but not with brushstrokes, but with his hands and mind. He splatters paint onto a canvas in a free, variety of motions. He allows the paint to paint, and in a way I used his technique as well. I allowed the paint to drizzle off the butter knife and onto my piece in a variety of different angles and speeds. The only difference is I chose to use brushstrokes to show the mixture of the colors creating a new color rather than leaving those colors to be differentiated.
What is the overall approach the author has regarding the topic of your inspiration?
Jason Pollock used lines, and splashes of color to create abstract art. This style of freedom with the brush is very soothing to me, and really fit my piece as a whole. Bethesda Softworks used a gear to show unity, and they put a gear around their name.
What kind of generalizations and conclusions have you discovered about people, ideas, culture, etc. while you researched your inspiration?
Some of the generalizations I have made were that people are very supportive of their way of life, especially in America. People choose not to recognize the flaws, in order to live the way they live. When American's see Red, White, And Blue they think American flag, there home. While the gritty reality is that there is more red to the American flag than meets the eye.
What is the central idea or theme around your inspirational research?.​
The idea that gears represent a working part in a larger machine, and only when they work together does the whole machine work. Also, the idea that color positioning creates a meaning, a long with the choice of mixing and not mixing different colors.
What kind of inferences did you make while reading your research?
During my research I made an inference that Bethesda's gear on the logo was created to show unity. I wasn't comfortable with just leaving it that way, so I later searched it up and I was corrected, though I had to fix somethings up.