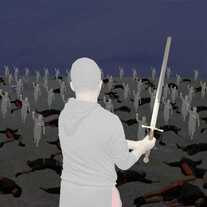 This piece "The War Within" is a digital manipulation piece inspired by "Wanderer above the Sea of Fog" by Caspar David Friedrich and a movie poster promoting the movie "300". As unconventional as they are, these artworks combine together in a sense to create "The War Within" a piece about the wars you have with yourself.

My plan for this piece was pretty clear from the start of the process that it changed very little. Scattered throughout the battlefield are other versions of me, lying dead on the grass. They will be laying in many different positions, and therefore I will have to take many pictures. The bodies will all be tinted a small more bit than the rest of the piece to show contrast, and make sure that the many bodies don't just blend in with the background. In the center will be another version of me, but alive and holding a sword. This symbolizes the wars you have within yourself, and how you must fight them. How you're killing different versions of yourself every time you fight your thoughts, and don't allow them to be shared. Also, very faintly will another group of "me's" be visible running towards the tired, beaten, and broken me with the sword. This symbolizes that the war never truly stops inside yourself, You're always fighting with yourself, conflicted about what to do next.

The first step was taking the pictures which I decided to do in my basement since it has the best lighting in the house. I took pictures standing towards the camera which would be the soldiers in the background coming towards the center me. This center me would be created with a picture with my back to the camera pretending like I am holding a sword because the sword would have to be put in later. I then took pictures on the floor which would be the dead bodies on the field. I then took a picture of a field and storm cloud which I would use for the setting of this scene.

The next step was using Photoshop which was the most difficult part of the process. Since I have a Chromebook at home, and I do not own an Adobe Photoshop account (at least one that's paid for) and so I had to improvise. I searched for Photoshop apps that I could at least work on. I tried downloading GIMP and it didn't allow me to save so I found a version of Photoshop that has the near same set up as Adobe. After finding the app I did the cutting out of the pictures so I could place them on the background. I used what this version of Photoshop called a Magnetic Lasso which grabs the sides of an object in a picture based on color and where you move the marker.

After this, I used a color overlay (located on layer styles) on the original pictures to give it the black, a reflection of no color or light. I then used the layer settings to duplicate the original layers and used the free transform tool to adjust the size. I made sure to hold the shift key while transforming each picture, because otherwise it would ruin the size of each picture. I made the closer pictures larger so that it would look more realistic. This perspective is similar to the one point perspective in my illustrations, however there is no street, or way in the center, and there is no buildings, only bodies. I started with the bodies on the field, I then field in the soldiers in the background, and Finally I put myself in the middle with the sword. I made the myself a lighter color because it is the direct opposite of black, and white is the reflection of all colors.

When creating this piece I changed very little of the process that I had to do going forward. At first I didn't have the idea of more versions of myself running at me. I questioned the idea again, because I though that this high amount of detail in such a small place could be too much, however it fit in perfectly with the pictures I took, and I was able to fit it in where a balance was created. I also didn't plan for dusty tint, however when I saw this poster while looking for older movies online, the tint in the background was perfect. I was originally going to go with a more grey, or green tint, but it didn't portray the same thing. I also placed in the tint differently. I was given pointers by the step-father to create a layer group which would save the color of the tint so I wouldn't have to write it down or memorize it. I was able to apply it to each aspect of the piece fairly quickly. Also when using the slower version of Adobe Photoshop, it was easier to do things the longer way, like continuously duplicating the layers, rather than trying to be organized.

This piece "The War Within" is a very well done piece for me and I am very proud of it. I worked hard on the piece when it came to the planning, and construction and it really paid off. I do wish however that I could've cut out the pictures a small bit better, and took some better pictures at that. My pictures were high quality, but they weren't the exact pictures I was looking for, Instead of having to take pictures based on my plan, I kind of had to create my artwork with the pictures I was given. I feel like this piece is one of my best pieces, and i'm happy to see what I can do with more experience with the Adobe Photoshop Program.

As it goes for my inspiration, I believe I used them exactly how I wanted to, in most of the right spaces. The tint in the bodies aren't as contrasting against the background tint of the piece, like in the "300" poster but they do work on adding balance without creating highlight. The me in front holding the sword is flowing with the background landscape as in "Wanderer above the Sea of Fog". As I stated before, I am overall happy with this piece and I can't wait to do more pieces using Adobe Photoshop.

Clearly explain how you are able to identify the cause effect relationship between your inspiration and its effect on your artwork?
The "300" poster along with the trailer has showed me a lot about what war is shown as and what it means. I took the feeling that war never ends. Though wars may come to an end, the war within yourself never changed. I also loved how this poster was able to capture the feeling of a battlefield with the colors used in the background. When analyzing the painting "Wanderer above the Sea of Fog" I realized that a single man in the center looking down the landscape adds depth to the artwork. The man in the center could mean a lot of things, whether he is looking to destroy, looking for beauty, or looking to survive. The idea is left up to the audience to interpret. I used this idea conversely, with a landscape that can't be mistaken for anything but a battlefield.
What is the overall approach the author has regarding the topic of your inspiration?
The "300" poster created by Warner Bros. Pictures, doesn't focus on warfare. In fact, it focuses on the journey of Leonidas and the strength of the Spartan warriors. War is looked as a necessity to get what is needed, and to be fair, 300 BC was that time.
What kind of generalizations and conclusions have you discovered about people, ideas, culture, etc. while you researched your inspiration?
During my research process I have found that many people are interested in the war between Sparta and Persia. Many people also however do not know how bloody of a war it was. The Sparta and Atlas war is possibly one of the bloodiest war when considering the fact that they didn't have automatic weaponry.
What is the central idea or theme around your inspirational research?.​
My two inspiration pieces both are similar to features in my piece "The War Within​". I took the "300" poster, and used features that communicated a battlefield vibe, while I took the "Wanderer above the Sea of Fog" painting, and used the combination of man and the landscape he is on.
What kind of inferences did you make while reading your research?
I inference that the movie "300" was about the war between the Spartans and Persians. I don't believe I have seen the movie before, and based on what I read, it follows the story of Leonidas, a Spartan warrior.