When going through my thought process for the creation of "Luminescent Branches", I knew I wanted to use a gradation of light to dark. I wanted to have a center piece that emits light, and at first I had the idea of doing a cross hung up in a room, but this didn't have the meaning I was looking for. I needed something that everybody can associate with, something that everybody can look at and determine the meaning based on their experiences. I thought about trees, and how symbolic they are. Trees have so many different meanings depending on the kind of person you are, and the experiences you have had. This tree would be crude, with straight and jagged lines. The brightness however had to be clean, so I decided to use crosshatching instead of using the intensity of the lines so they would be defined. 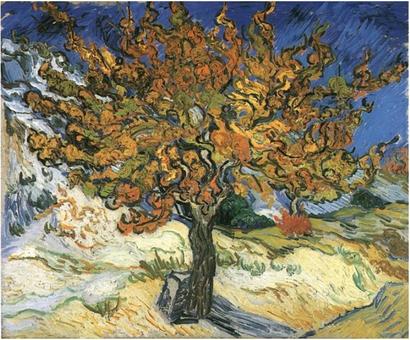 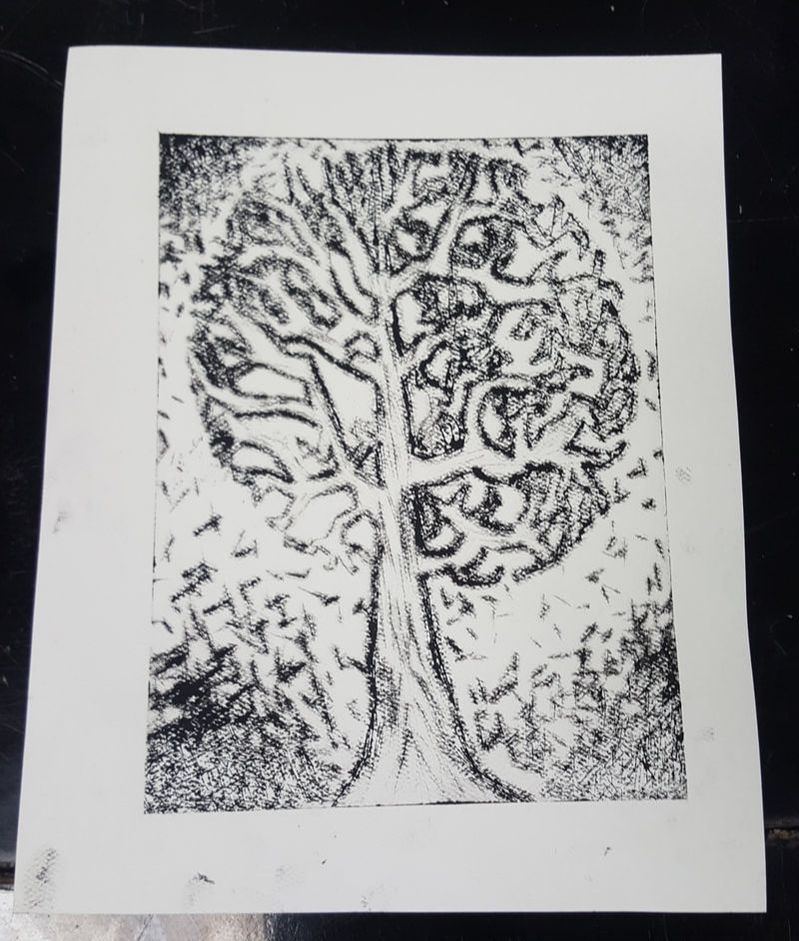 "Luminescent Branches" was created through the dry point printing  process; etching into a plastic plate with an etching needle (or something sharp). I decided to use my exacto knife to create the crude straight lines I was looking for. I also added texture to the tree by creating softer lines in the tree. Before starting the next step, I put the paper I would be printing on in water and set a timer for 8 minutes so the ink would transfer to the paper easier. During that 8 minutes I put a small amount of "...ink..." and spread it around on the plate, with a "..." After the ink is spread, I used newsprint to clean up the excess ink. I made sure to not to push to hard, as it would remove some of the ink from the crevasses. I decided to leave some of the ink in the corners because I wanted the corners to be black and fade into a lighter color. During that cleaning process I took the paper out of the water, and put it in an old T-shirt until I was ready to print. When I was ready to print, I put a piece of newsprint down and then my printing paper. I positioned my plate over the printing paper and placed it etching-side down. After everything was down, I rolled the "..." over the plate with one fluid motion. I didn't want the choppy block lines in my piece, which is why it was one fluid motion rather than, start, stop, start, stop.

When scratching to the plastic plate, I decided to use an exacto knife and it proved to be very useful. I couldn't create the smooth edges that i wanted at first. That's when I realized that smooth edges didn't accurately depict the feeling of the darkness. The light is going to be nice, and symbolize hope, but hope can come from anything. And I think that the crude lines that I've used depicted the ridged reality of hope. Also, the mixture of the crude lined branches and the circular shape the the branches make on the outside complement each other creating a balance of negative and positive space. After etching, I had to go through the printing process. First I used a large amount of ink, and when rubbing off the excess ink I rubbed too hard. When I printed on the paper, it was very light which told me that I removed ink from the scratches. The second time I used a plastic spoon to scoop the ink to get a lot on the plate. I used the same technique as I did in the first print except I used a light amount of pressure. It took longer but it did work eventually and I went on to print. The print came out okay but I wanted to do one more just to see if I could get a better product, and I did not. I believe I didn't use enough ink, and so the final print came out the same as the first did. I decided to use my second print, since it was the cleaner out of the three.

"Luminescent Branches" was created through the dry point printing process which wasn't a very complicated process. However, the hardships of creating this piece were more than complicated. I chose to use the exacto knife for this piece, and creating deep lines that would pull the ink in wasn't difficult either. But I found that the more pressure I put on the plate to create those lines, the higher the risk was of creating too long of a line. The corners on this piece often weren't connected, even though in the final product, you can't tell. Also, as can be told in my experimentation; I found that during the printing process, it wasn't easy to get a very clean piece. There were only a few lines that weren't deep enough and had to be etched deeper. But the process of inking the plate, and cleaning it off lightly wasn't easy. I made several mistakes, and each final print showed that. I was told by a fellow student to go over the plate twice with the press so the ink would push more onto the paper.
"Luminescent Branches" is another adaptation of the "Tree Of Life" and it's meaning. This is shown through the darkness around the ends of the piece, and the brightness that is emitted from the tree. The Tree Of Life was an all powerful symbol in religion (specifically Catholicism and Christianity). The tree in my piece represents a powerful symbol as well, the symbol of hope, and how hope can make the darkest of times seem better.

Clearly explain how you are able to identify the cause effect relationship between your inspiration and its effect on your artwork?
"The Mulberry Tree" was used as a starting point for my idea, and also a central idea. I wanted to show my meaning, for what I made the piece to represent, while also leaving the piece as open as possible for the viewers of my piece to use there own experiences to relate it to. The "Tree Of Life" is a further reinforcement on the idea of trees being all powerful. Carrying such a high power was important for each religion/culture that use the Tree Of Life. I wanted to portray hope as one of those powerful things that can be lived upon.
What is the overall approach the author has regarding the topic of your inspiration?
Vincent van Gogh used painting as a therapy for himself and potentially others. He indirectly created a whole word, a world made up of hallucinations and imagery that differed from reality. The creator of the a Tree Of Life in each different instance, wanted to represent something powerful. Whether that be a tree of eternal life, or a tree representing balance and harmony.
What kind of generalizations and conclusions have you discovered about people, ideas, culture, etc. while you researched your inspiration?
When thinking of the deeper meaning of a tree, people, and religions often think of a high power. A high power meaning a larger idea such as hope, forgiveness, or reassurance. Very few people thought about darkness, and death.
What is the central idea or theme around your inspirational research?.​
The central idea around my inspiration in the idea of a large symbolization that part can be represented differently by everybody, and part be represented by a certain higher idea.
What kind of inferences did you make while reading your research?
I made the inference that "The Tree Of Life" was a very well known idea/ piece. The symbol of the tree may change a small amount from each ideal but it won't stray from the idea of a powerful symbol.